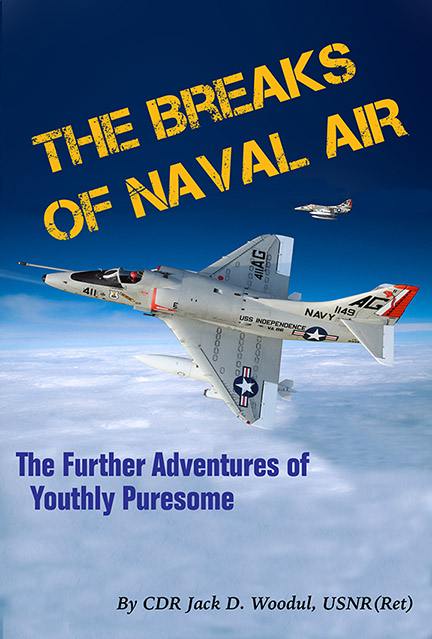 The e-book cover of “The Breaks of Naval Air — The Further Adventures of Youthly Puresome” by CDR Jack D. Woodul, USNR(Ret)

Previous website visitors may be axing, did this bushel basket of sea stories and anecdotes of questionable taste from the misty pre-history of Naval Aviation get carted off by the Inquisition? Nossirs. Not yet. A critical mass of technology and other folks’ expertise has turned them into THE BREAKS OF NAVAL AIR — THE FURTHER ADVENTURES OF YOUTHLY PURESOME, now available on Amazon.com, Barnes & Noble and Apple iTunes as an ebook. The author was finally shamed into arranging things into a rough, book-like order, and, if that effort results in the occasional dubloon for the cold beer fund, it was worth it. The pomes and blog will remain on the website for items a little farther from scrutiny by drones.

I have to thank the kindness and genius of CDR Jan Jacobs, USNR(Ret), lately of The Hook magazine, rescued my stories from the chaos of my computer and stuck them in an electronic pile. For this act of mercy and kindness, I am indebted to him. I will always be indebted to the Tailhook Association and their fine magazine, whose former editor of The Hook, my friend CAPT Steve Millikin, USN(Ret), published my work with Jan’s help. He is too fine a gentleman for me to suspect character fault for finding my stuff worthy of consideration. But he and Jan did so over a long period of time. Many of the same stories have also been published by Bob Hickerson in A-4Ever, the excellent Skyhawk Association magazine. Bob is also a fine gentleman representative of the United States Marine Corps, and he must also be afflicted by the same mutant gene as Steve. I also need to thank Carl Snow for his artwork that improved my stories thru all The Hook issues, David Tipps for the cover artwork and Jan Jacobs for the cover design.

Because of all this background effort, Chris Keys of Casemate has been kind enough to see this collection stuffed into publishable content.

I told many of these stories over many years to fellow aviators and anyone else who would listen before I started trying to write them down. I listened to stories as well, and I give thanks and acknowledgement to all those aviators who passed them on. Many stories are common to Naval Aviation, and I just tried to write them down before they disappeared, as I feared they might. I have always encouraged folks to write their stories, but most don’t. I hope those that originally passed them on in cockpits or over cold beers accept my gratitude and thanks.

We Naval Aviators of my ancient era occupy a shared space and time that was unique, heroic, funny, outrageous, and tragic. We circled the wagons against a society that repudiated us, picked off a bunch, and said frabb anyone that couldn’t take a joke. We share a common bond that I am unwilling to let perish when I am hustled off to the Non-PC Gulag.

Finally, we share the love of riding fierce beasts, into battle with sabres waving, prancing around the edge of aerial cliffs or just for fun. We all have our stories. Nowadays, as the oral histories at Happiness Hours fade, it is even more important to put them down before we join those lonesome trumpet triplets sounding in the distance over forgotten battlefields.

Beginning in the Fall 1991 issue of The Tailhook Association’s quarterly publication, The Hook magazine, until Fall 2011, a series of light-hearted articles were published under the title: “The Further Adventures of Youthly Puresome.” Youthly is the alter ego of Jack Woodul, a native of New Mexico who went through the Navy’s Training Command in the early ’60s and earned his Naval Aviator’s wings. He flew the A-4 Skyhawk in Vietnam, and after leaving active duty continued to fly F-8 Crusaders and F-4 Phantoms with the NAS Dallas Reserves. When not bagging flight time in gray jets, he was an airline pilot in “real life.”

The Youthly Puresome series ran in every issue of The Hook from Fall ’91 until Spring ’07, then three other installments were published ending with the Fall ’11 issue. They ran the gamut of “sea stories” (which, instead of beginning “Once upon a time” usually start out “Now . . . this is no shit!”) about his time in the Navy and Navy Reserves, but also spilled out into his airline career and personal life. Web-formatted versions of a number of them were once available on the Tailhook Association’s website, but in early 2013 they became missing in action as a result of a site redesign. Some are also available on the Skyhawk Association website and at Old R.O. Graphics website.

The stories were meant to be a snapshot of a certain time in tactical Naval Aviation. The author is extremely proud that the series led to an OUTSTANDING SEA STORY award by Fighter Squadron 201 in 1988; the 1994 Hook Magazine Contributor of the Year; and a 1998 Tailhook Association Lifetime Achievement Award.

A few of the Youthly Puresome stories are still available by clicking on the links in the menu bar above, and then you can click on links to read the individual articles in PDF format (Adobe Acrobat). There will be, over time, some unpublished articles and other works of Jack Woodul (aka, YP) published on this site. The menu-bar link to Duel Over Douai is for a novel of World War I aviation co-written by Jack, Barrett Tillman and Robert “Boom” Powell.