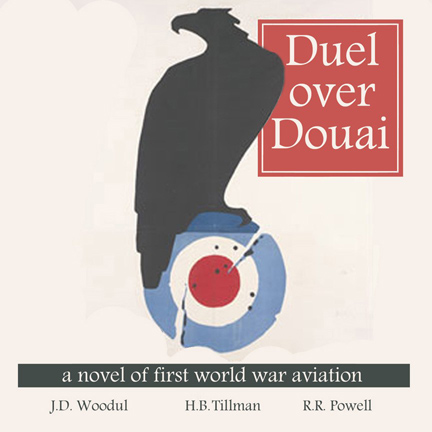 The perceived glamor of Great War aviation has long drawn novelists to the subject with authors as diverse as Charles Nordoff (The Fledgling), William Faulkner (Soldier’s Pay), and Jack D. Hunter (The Blue Max). Now three aviation colleagues pool their knowledge and talents for a fresh treatment of a well-proven subject.

Duel Over Douai takes the ninety-year literary tradition in a new direction. It is written by two professional pilots and a professional historian who combine extensive aviation experience with lengthy writing backgrounds. Retired Navy Commanders Boom Powell and Jack Woodull logged hundreds of combat missions during the Vietnam War, and Barrett Tillman has earned a rare niche as both a novelist and historian.

The story occurs during 1917–1918, told through the eyes of two cousins, Robert Woodall-Powell and Friedrich von Tillmann. Their families, related by marriage, are sundered by the Great War, but “W-P” and von Tillmann retain fond memories of their shared childhood. Meanwhile, Woodall-Powell is joined by a Texan, George Armstrong Cody, whose frontier demeanor ill fits the “Brits” in a Sopwith Camel squadron. The novel’s multi-tiered conflicts address not only men at war in a new element, but cultures in collision—the prewar Victorian era violently ended with a redefinition of relations between people and nations, men and women.

In a rare literary device, each author places himself in the position of a primary character. The original chilly relationship between W-P and Cody melts in the heat of combat as they learn mutual trust and discover unexpected traits in common. Reassigned to home defense, they convert to Bristol fighters opposing Zeppelin and Gotha raids on London.

Meanwhile, von Tillmann—probably the only Naval Aviator in Great War fiction—earns his wings as a torpedo plane pilot in Flanders and gains a transition to fighters. He finds himself promoted to Staffel command at the precarious age of twenty, and thereafter struggles to do right by his men. The tightly-drawn psychology of young males at war clearly benefits from the authors’ personal experiences.

Duel Over Douai is meticulously researched, not only technically but as to geography and even weather for a given period. British and German squadrons are fictional, but they are based on specific units accurate to the story’s time and place. All three authors have extensive experience in open-cockpit aircraft, and Boom Powell frequently flies World War I replicas of both sides. The cockpit authority in Duel Over Douai therefore is unexcelled.

For a unique treatment of an enduring subject, Duel Over Douai offers something to aerophiles and generalists alike. The protagonists’ transition from fledglings to predators climaxes in a storm-tossed sky where it is never certain who might live and who might die.

The book is available at Amazon.com and on iTunes in electronic form.

Barrett Tillman’s discussion of the writing of the book on his Blog. Clicky